Complex. Fast. Agile. Digital product developmenthas changed over the past years. New tools, trends and ways of working definethe market, and with it the way we think and act. We are entering a world whereinnovations are brought forward faster than ever.

Software development is a diligent craft that results in numerous lines of code. This is especially unsuitable for company building, where a quick turnaround in testing prototypes with clients is crucial. A traditional software development project runs the risk of needing investment in lots of resources before the launch of the MVP. The solution for this issue is now supposed to be provided by so-called ‘no-code platforms’. No-code here describes tools that allow the building of applications without having to write a single line of code. The trend towards a code-free creation of apps and web applications is fully afoot, and one of the tools available clearly stands out from the masses. The platform ‘Bubble.io’ has reached a remarkable level of development, showing off a strong community and a wide range of possibilities. That’s reason enough for us to take a closer look at this tool.
Approx. 5 minutes

On the way to the final product, a project passes through various stages. Roughly put, first comes the research phase, followed by a stage of exploration and ideation. After that we get the conception stage, in which the underlying architecture, interactional processes (‘flows’) and basic design guidelines are laid out. At this point at the latest, first user tests are conducted in search of the answer to one essential question: Does the idea work? Interactive, clickable prototypes, formulated with design tools like ‘Figma’, are a useful way to simulate the structure and logic of an idea, and to communicate its basic concept. Yet, how much potential a concept and its implementation truly have, can only be established when the software has actually been developed and can be tested on the market.

While crafting interactional processes and designs into functional applications used to be a pure software development job, no-code tools now allow app development without any knowledge of a programming language or frameworks. Generally, these platforms use a visual interface with a number of elements, or ‘building blocks’, that can be combined freely. This solution allows for the focus to be fully on the creation of a functional app, while the necessary code is being written by the platform in the background. No-code platforms can display single-flow processes, but are also able to recreate more complex applications like AirBnB, Tinder orWikipedia.

Focusing on the development of apps and web applications, the platform ‘Bubble.io’, founded in 2012, has sparked our interest especially. As a relatively young company, Bubble.io are showing an impressive state of development. Both the platform itself and the ecosystem of plugins and templates that has grown around it thrive under the constant development, not only because of a strongly involved community, but also due to the people behind the curtain.

The team at Bubble.io have managed to create an enormously flexible development space, concentrating on the following three key aspects:

The design space allows users to create extremely accurate and adaptive interfaces in no time via drag-and-drop. In contrast to other no-code platforms, users have access to their own fonts and design libraries, as well as various icon libraries, enabling them to implement their design plans without any restrictions.

All databases the app has access to can be retrieved in the data space. Bubble.io provide the opportunity to create one’s own databases within the app itself, to be saved in their cloud. If a project is already working with existing third-party databases, the various coding interfaces allow a hassle-free use of those, too.

The third space is dedicated to the workflow and connects data and design. Pre-set building blocks facilitate the creation of functions and thus give life to an app. There is a variety of workflows to choose from, from changing colours to new user registration.

The development space is made complete by an ecosystem of plugins and templates, which can be easily and swiftly integrated, further expanding the range of possibilities provided by Bubble.io.

To see what Bubble.io can really do, we put the platform to the test with our own concepts. We chose to develop an application that conveys a guided process identifying machine faults and effective solutions for those. An essential characteristic of the app are two user spaces which are separate, yet connected at system level. One allows registered users to search a library of content in a structured way, with the option of flagging up missing content. In the second space, an administrator can then edit this and release the new content. This project was the ideal setting to test interactions between users as well as the use of interconnected databases. We wanted to see if we could find the limits of Bubble.io.

What we were able to do was astonishing, even for us. Within a single day, we created the complete login space, enabled new user registration and the sending of verification emails. After a week, the basic structure of the user interface was built with Bubble.io. Another week into our work, contents could be filtered and searched. In the third week, we created the administrator space and enabled the flagging and editing of contents. There was a steep learning curve, and the results are clear: With rough design guidelines and visualised interactions we were able to achieve in three weeks what would have taken two developers two months’ worth of work.

The results impressed us enough to use theBubble.io project for the presentation of our idea to potential clients. Having reached a high level of development not only enabled us to check the concepts and theories we had come up with, but also allowed for a convincing presentation of the project idea.

To code or not to code?

Bubble.io has proven that it’s the perfect tool for exploring potentials in the early stages of a project. Among other things, we were able to answer questions about market acceptance with a functional app or identify problems with UX early on. In the future, usingBubble.io will shift the relevance of tasks and requirements in the design process. Clickable high-fidelity prototypes (aka ‘Click Dummies’) as well as diligently developed screen designs for every specific state of an app will become less important. With Bubble.io, apps can be created by designers, leaving them in complete control of design decisions during the implementation.This will result in a much quicker turnaround, as there are no handover processes needed between designers and developers, and because adaptations can be made in no time.

Since Bubble.io allows for a flexible style of work and less time commitment, it’s especially useful for more complex prototypes and their first validation with real clients, as well as for projects that are either time-sensitive or have a limited budget, or both. The platform reaches its limits with very complex projects where a high number of users needs to be accommodated, and which those that are extremely demanding on the backend. As we don’t want to limit innovations, we can definitely see ourselves leading a project through all of the MVP and beta phases usingBubble.io. While we’re optimising the market solution fit with an already published app, and earnings are potentially already being generated, we are developing an independent app that’s based on a flutter framework in the background. Changing seamlessly between the two applications will be possible when requirements increase, getting the best of both development methods.

The bottom line for us: Bubble.io is a valuable extension to speed up the innovation process of our projects. We regard the platform as another tool in the V_labs company building kit that helps us shorten the project timescale. Eliminating the service of software development accelerates the design- and innovation process substantially and saves (time) resources. Iterated loops require considerably less effort and can be implemented flexibly and fast. 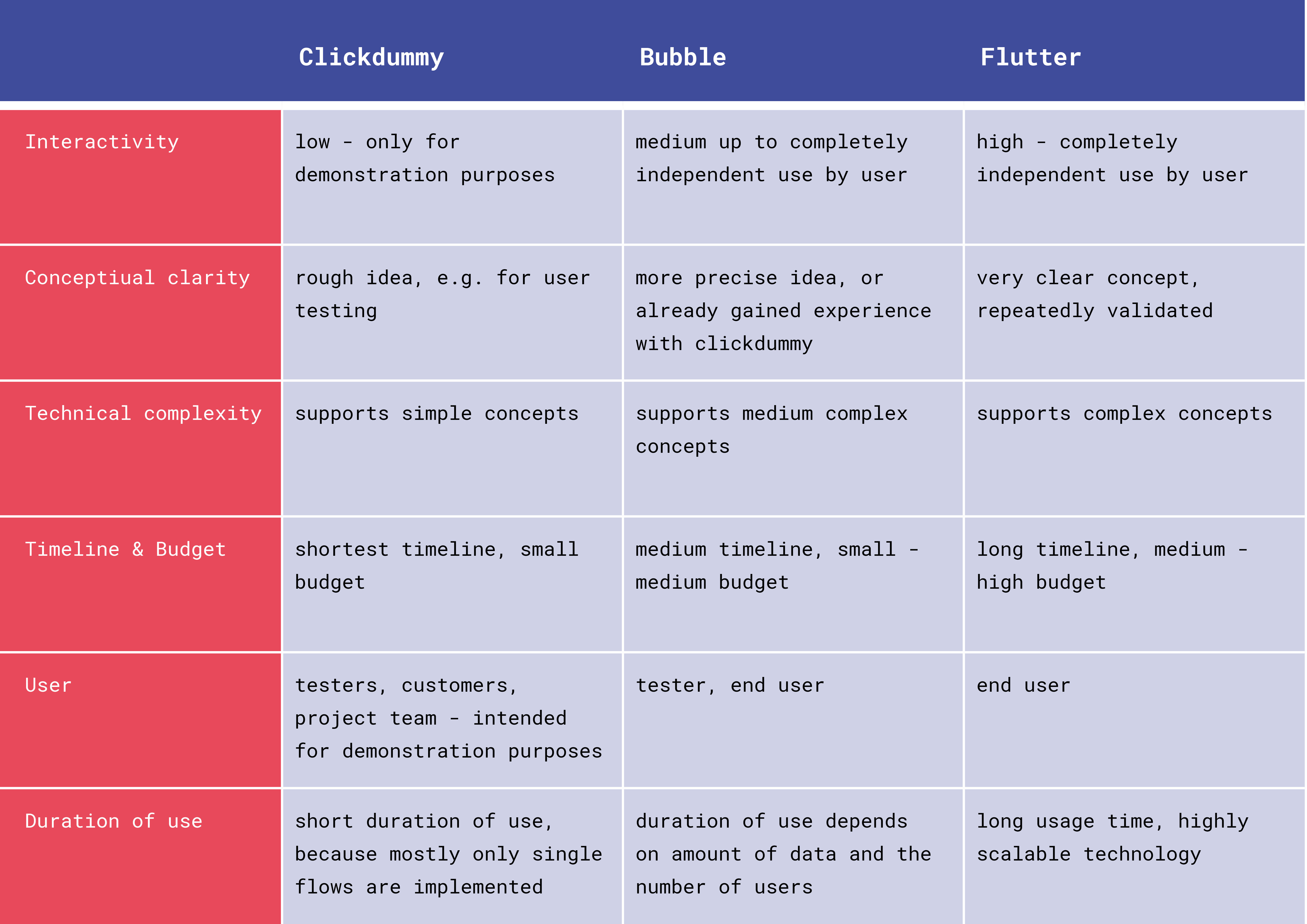 Finding answers to these questions will help you decide which technology to use in the implementation of your current project or project phase.

·      Interactivity: How interactive is the solution supposed to be? Is it for demonstrative purposes only or should users be able to use it themselves?

·      Clarity of the concept: How clear does the concept of the solution have to be before the technology can be used? Does a rough idea exist, that needs to be tested with users? Do you have a precise idea for the solution in mind, or have you collected any data with Click Dummies, for example? Or do you already have a clear concept, which has been validated (repeatedly)?

·      Technical depth &functional scope: What’s the technical depth necessary for the solution? How many functions does the solution need to comprise and how complex are they? Which requirements in terms of connection to databases do you have? How sensitive are the data handled? How is the backend structured?

·      Time & budget: How much time do you have for the implementation of the project and how big is the allocated budget?

·      Users: Which users should be presented with the solution? Are you looking to just present the solution to the clients to clarify design approaches or concepts?Will there be user testing? Or is the solution supposed to be presented to the end users, who expect full functionality and a complete design?

·      Duration of use: How long are you expecting the solution to be used? Short-term, for the implication of single flows only and their presentation and testing, or longer-term?

The table combined with your answers to these questions should help you make the right choice for your prospective project.

We support our customers in innovation projects - as a company builder or with various innovation services (consulting, coaching, rapid prototyping, IT development). The 17 employees have many years of experience in strategy, online marketing, service design, agile project management and UX design.